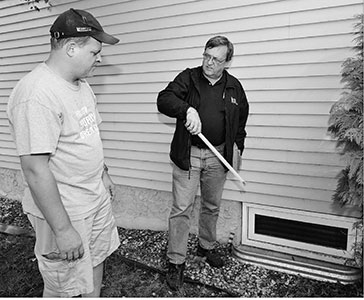 Edmonton, AB - The find helped to explain the dampness and slight smell of mildew in their basement. The Unger home was Suprovich's fourth appointment Wednesday afternoon. From Mill Woods to the south side, to Leduc and back to Edmonton, it had already been a long day. "It's not busy. It's stupid busy," he said.

Since this summer's heavy rainfall, Suprovich said his appointments have quadrupled. Potential clients are on a waiting list until September. This summer's rainfall has been slow and steady, leaving the soil constantly moist and giving it little opportunity to dry. Suprovich estimated the incessant rainfall this season has left thousands of Edmontonians with leaky basementsand more with moisture problems like those found in the Ungers' basement. For the family's three young sons, their basement is the main playroom. Recently, Lianne was cleaning up after the boys and noticed the floor felt damp. "I asked 'Did one of you spill a drink down here?' " Water had found its way in to the edges of the basement carpet.

Later at the kitchen table, Suprovich handed the couple glossy brochures and a quote. To seal the crack, it will cost $950. That's cheap compared to the more long-term options. Suprovich recommended one system called WaterGuard, a sophisticated sump pump and piping system designed to withstand clogged dirt and soil that often comes along with a traditional weeping tile. The minimum price for the Unger house: $12,000.

It's a foolproof system, Suprovich said, but Lianne shook her head. "It's not happening," she said. Frits Wortman, a senior consumer information officer for Alberta at the Insurance Bureau of Canada, said there's been an increase of calls for claims related to water damage and flooding because of heavy rainfall. Insurance companies in Canada won't foot the bill for damage to a home caused by overland flooding. They won't pay for water leakage or mould, either -these are considered to be maintenance issues, Wortman said. Most policies, however, will cover sewage backup. The city has made an effort in helping people with their leaky basement woes. Leo Girard, director of drainage services, said the city has received more calls than usual since mid-June, when Edmonton saw more than 50 mm of rain in one day, causing many basements to flood. Girard could not offer an estimate on the number of residents with damp or leaky basements, but the city's drainage specialists are booked solid until August.
The city-run service offers free on-site consultations with homeowners to identify drainage and structural problems. Since the program began in 2004, Girard said there's been "a steady need for it." Suprovich said when it comes to waterproofing, homeowners are often reactive, not proactive. He advises homeowners to check for cracks in basement walls and ensure sump pumps run properly. He recognizes the reactive nature of people keeps him in business. Despite the gloom that comes with an overcast Wednesday afternoon, Suprovich said it's better than a drought.
"It's feast or famine," he said.
[email protected]

Back to Previous Page
Back to News & Events